Freshlist is proud to present the Limelight Event series!

Limelight Events will bring in headlining talent and full production to highlight the #Freshest sounds from across the country. 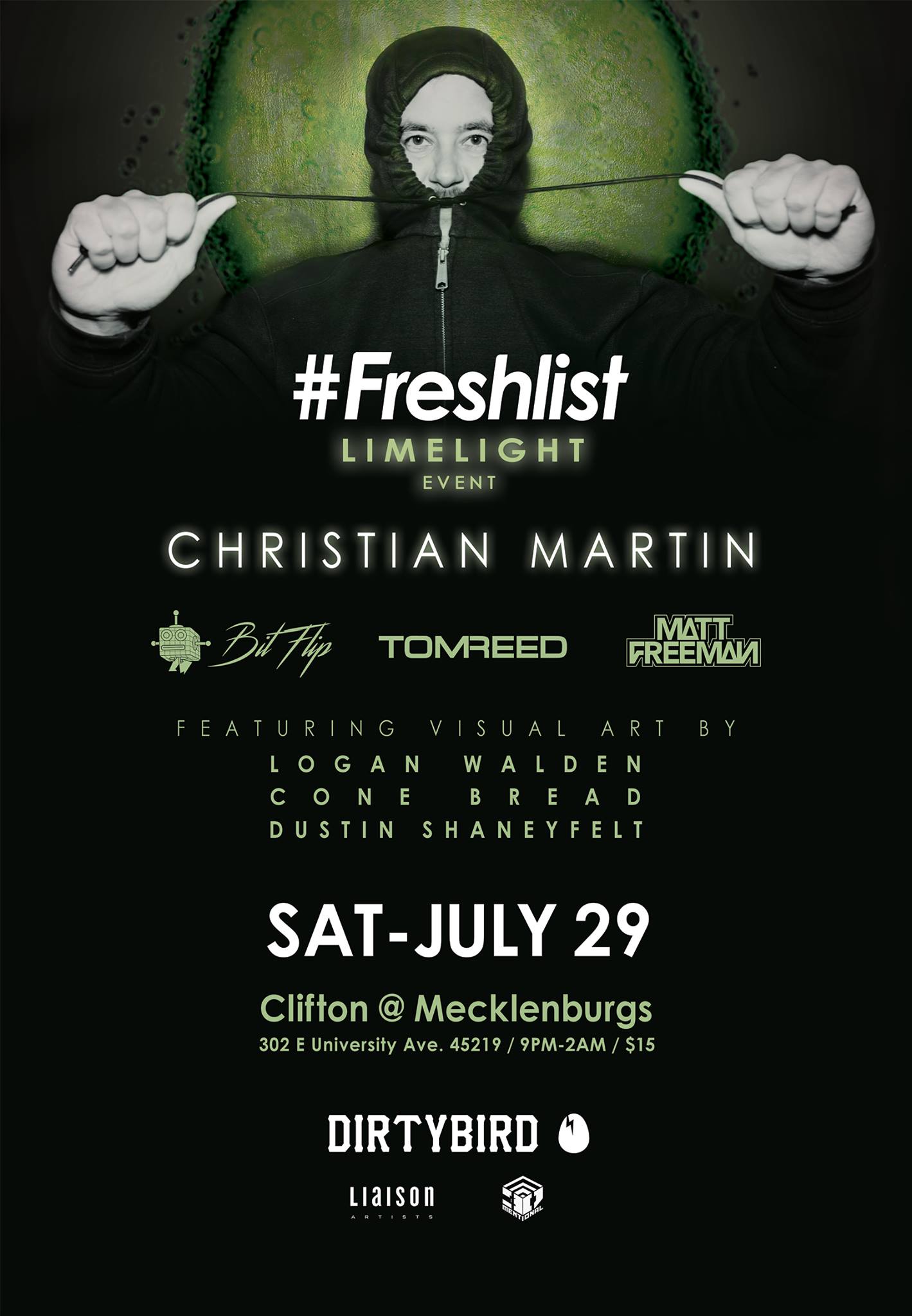 TICKET SALES FOR THIS EVENT HAVE ENDED. 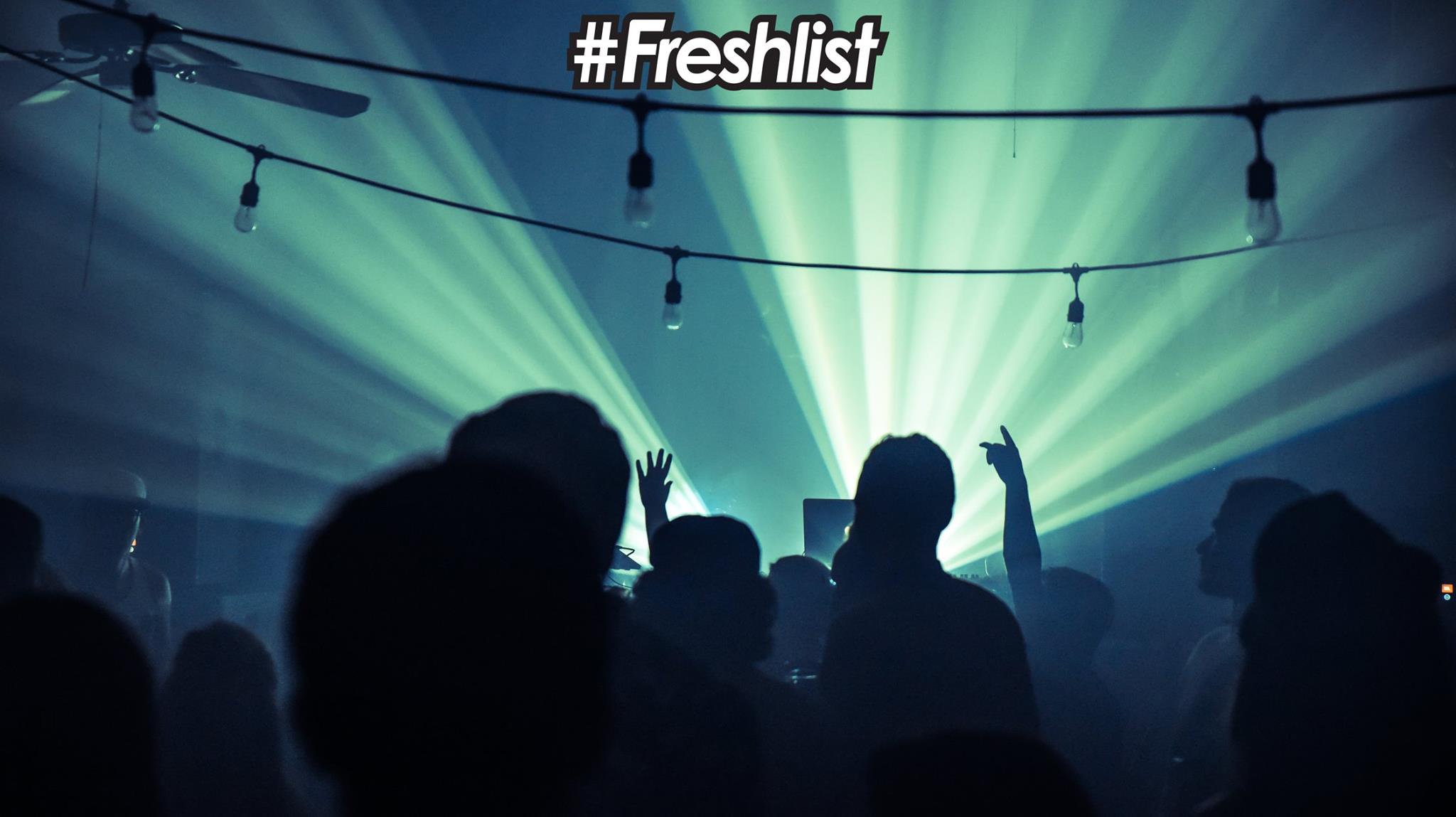 This will be the first appearance of any Dirtybird artist in Cincinnati area. Let’s welcome Dirtybird to our city and show them how we get down!

Since 1995, Christian Martin has been exploring electronic music from one end of the earth to the other; from full-moon parties in the deserts of California to the thumping, dark corners of the London club scene. Christian followed his love for spleen-rattling
bass to San Francisco in 2000, where he met up with the now legendary dirtybird crew. The dirtybird BBQ was the brainchild of the four original members – Christian & his brother Justin Martin, and friends Claude VonStroke and Worthy. They had a personal mission to change the landscape of San Francisco house music by throwing an epic free party in the park, based on their new signature sound.

In 2003, with nothing to lose and everything to gain, Christian bought a massive yet necessary sound system on his credit card. This set the standard for a new era of die-hard dedicated DIY producers, all with productions based on heavy bass-lines, smiling faces and dance floor delights.

In 2006, Christian began releasing a steady stream of tracks, first collaborating with Justin under the “Martin Brothers” alias, as well as Claude VonStroke. The Martin Brothers partnership has produced such hip-hop influenced hits as ‘Duckface’, ‘Stoopit’, & ‘Dum’, as well as remixes for Ed Banger and Fool’s Gold. On his own, he’s released his own brand of bassy house music on labels such as dirtybird, Trapez, and Anabatic. His low end take on tech house has led to remixes for musical heavyweights such as Chromeo, Underworld, L-Vis 1990, and many more.

Christian’s devotion to large scale bass has allowed him to champion the dirtybird sound out of the park and onto giant soundsystems at clubs and festivals worldwide. From Fusion (Germany) to Shambhala (Canada), to Coachella & Symbiosis (US), there’s a constant demand for what he describes as “bass from the ground up.” In San Francisco, Christian is a resident at dirtybird’s raucous quarterly party at Mezzanine; and also at Monarch, the newly opened marvel of a club. His new musical alias Leroy Peppers has recently roared to life, offering an even heavier take on hip-hop influenced bass music. Whether it be Leroy or Christian behind the decks, if your hands aren’t clapping your ass surely will be.

Matt Freeman has been ahead of the nightlife curve for 22 + years. His DJ career started in 1994 as the Resident DJ at the now defunct Asylum night club, laying down top Industrial / Techno, and Acid tunes. Not only was he an instrumental part of Dayton club life, but was also a part of the infamous Illuminator crew, which is known for throwing some of the Midwest’s BEST underground events featuring the highest caliber DJs from around the globe.

Do your best to keep up with matt while he is in the booth, he can take it from Jackin’ House to Techno, to Acid house and back in the blink of an eye. “My attention span is short, I reflect that in my sets, an hour and 1/2 isn’t a long time to tell a story, and I have a lot to say.” Matt has played almost every major city in the Midwest, produced w/ such musical giants as Paul Birken, released dozens of mix CDs, has been a direct supporting dj for Sasha, Josh Wink, Bad Boy Bill, Manic Focus, Detroit Techno Militia, Terry Mullan, DJ Funk, KMFDM, My Life with the Thrill Kill Kult, Andy Laplegua (Combichrist), and many others.

After taking a few years off as a DJ, Tom Reed is back on the scene. Having reinvented himself as a DJ and utilizing many years of experience, Tom Reed has the know-how to design amazing DJ sets on the fly. Using not just the latest cutting edge in DJ technologies and the funkiest in House music, but also by his uncanny ability to read a crowd and knowing what will keep their asses shaking all night. This newest member of the Freshlist collective will not disappoint.

Since 2006 Bit Flip has been rockin’ dancefloors with his breakbeat oriented style. With a passion for bass and moving the crowd Bit Flip tailors his set to the vibe of the night. Anything from the 808 bass driven Breakbeat to rolling Tech House and funky Garage his sets will take you on a journey of the underground, the classics and the upcoming. Expect the unexpected and prepare to move.